Angola, Indiana
Housed in the former Angola Christian Church, Trine University’s T. Furth Center for Performing Arts is resplendent with rich furnishings of classical architecture including gilded ornament, marble, chandeliers, and paintings. An important resource for the students of Trine University’s music and theater programs and the community at large, the Furth Center features state of the art performance equipment and a refined ambiance. The Center’s Ryan Concert Hall is reminiscent of an Old World Theatre. A highlight of the Ryan Concert Hall is the dome which features an original mural designed and executed by Conrad Schmitt Studios in collaboration with Dr. Tom Tierney, the Director of the Humanities Institute at Trine University.

The mural is a playful homage to art history, performance, and Trine University values. It seeks to educate and delight the viewer. Mythical and historical patrons of the arts, music, and theater are represented as gold statues, painted in their own classically inspired niches: Pope Gregory the Great, composer Johann Sebastian Bach, Roman goddess Minerva, and Greek god Dionysus. The mural also features figures such as St. Cecilia, patron saint of music, and Mnemosyne, mother of Muses and patron of memory.

The mural is full of humor and wit. The figure of a student in a Trine University sweater appears to be praying but is really texting, and imminently tumbles over the balustrade, while Minerva, goddess of Wisdom, looks on in silent judgement. The text-messaging Sophomore is saved only by Mercury’s wings that appear on his sneakers – a clever play on the “Messenger of the gods.” In the highest reaches of the dome, playing with the mural’s frequent use of trompe l’oeil to fool the viewer’s eye.

The use of Doric, Ionic, and Corinthian capitals, several types of arches, and various wings on the mischievous putti are all references to changing styles throughout the art history canon. All together, the Ryan Concert Hall is an entertaining and inspiring piece that captures the soul and wit of the community and its engagement with the arts. 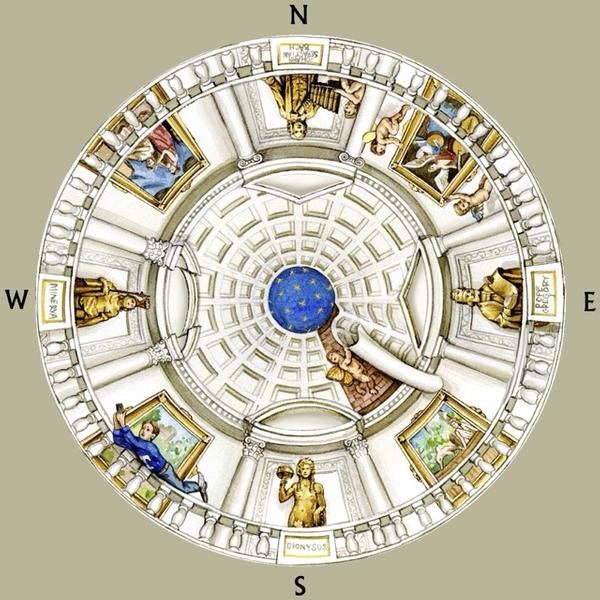 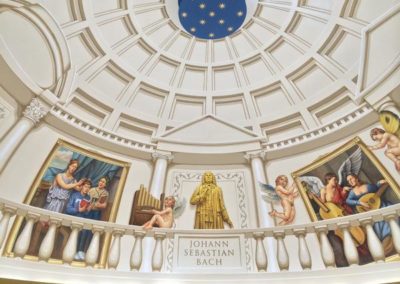 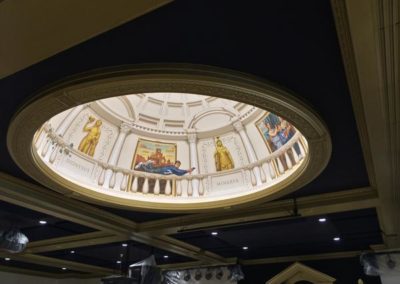 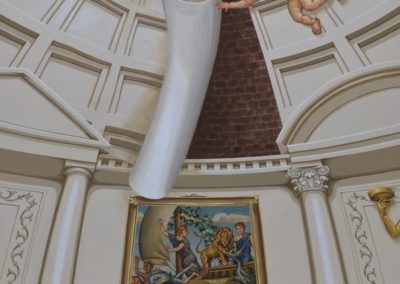 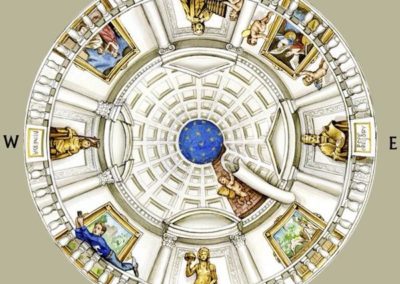