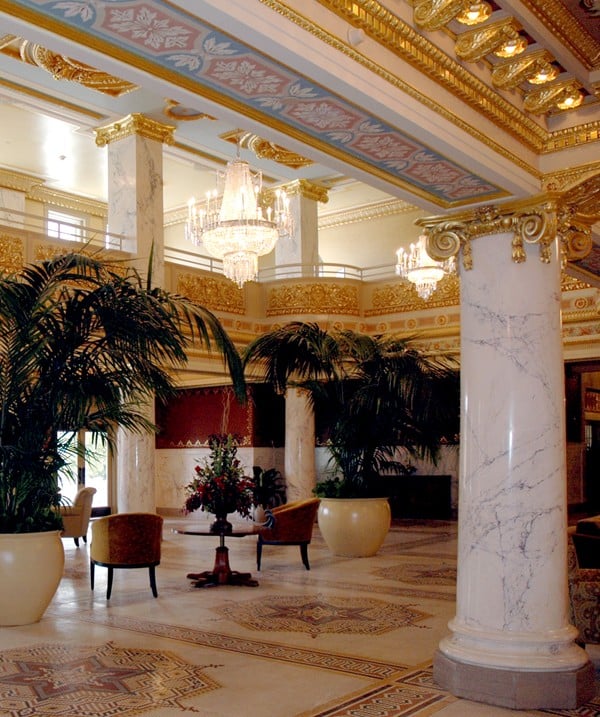 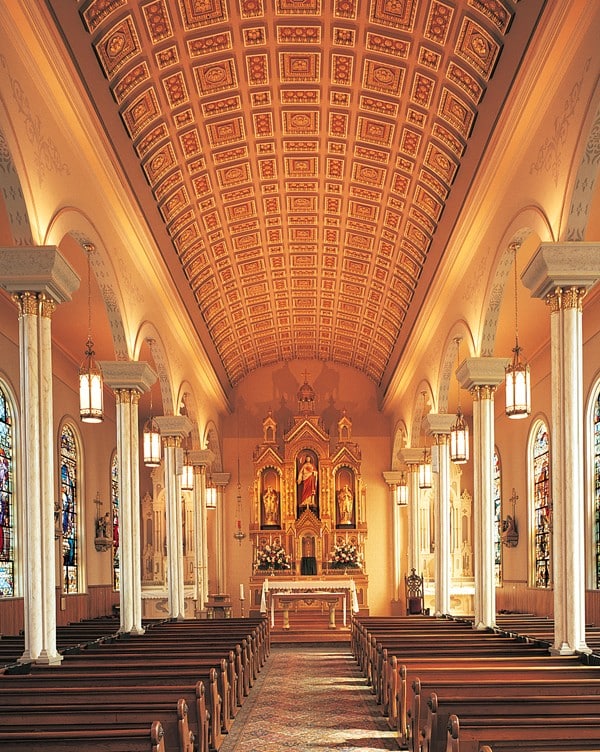 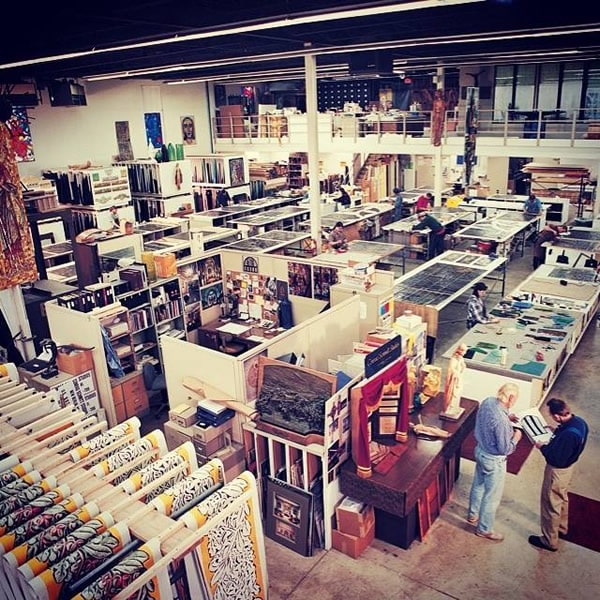 Decorative painting and ornamentation plaster restoration work hand-in-hand to achieve environments of great beauty. Ornamental plaster conservation, restoration and replication are frequently provided by CSS in conjunction with decorative restoration when plaster is loose or damaged. Even missing elements of plaster ornament can be replicated from physical evidence or historic photographs.

New, architectural ornamentation can also be created to enhance an interior space. For instance, CSS has provided the addition of coffers, with and without rosettes, to barrel-vaulted ceilings in period-sensitive church renovations for which an elevated level of decoration was desired.

CSS also creates and restores the extraordinary imitation marble known as scagliola, which originated in Italy and was lavished on turn-of-the-century American civic buildings. Scagliola can be so convincing that even marble enthusiasts have been fooled by it. One indication of scagliola use is a very large expanse without joints. Also, marble is usually cold to the touch and scagliola is less so.

The technique for creating the gypsum-based product has remained shrouded in an aura of mystery for hundreds of years. Scagliola projects require knowledge of the material and its historical use in the U.S., as well as significant experience in creating it.

Conrad Schmitt Studios’ projects have included the traditional European technique that uses clumps of a doughy mixture with mineral pigment for veining, as well as the more common marezzo technique, which employs an almost liquid mixture and raw silk fiber for veining. The technique utilized in a historic ornamental plaster restoration project is dictated by that of the original artwork.

By conducting a project’s ornamental plaster restoration with the decorative painting, CSS can provide superior results and coordinate the execution of both specialties in an efficient and timely manner.

An exciting element of our work in ornamental plaster is the creation of custom designed and sculpted items, ranging from custom brackets to the creation and installation of entire vaulted ceilings. Equally exciting is the restoration work of re-creating missing or damaged elements with the responsibility to preserve the architectural integrity of historic buildings.

Ornamental plaster moldings can preserve architectural spaces ranging from decorative or vaulted ceilings to plain cornices; from interior plaster to exterior walls; and from brackets and rosettes to medallions. Each space is equally important in transforming a room. Using historically accurate material and skilled craftsmanship, we are proud of each crevice that is transformed, a renewal of history within each space.

Experts use ornamental plaster restoration to fabricate spaces; to decorate delicate ornamentation and larger statuary; to repair missing elements, to replace historic moldings too damaged to restore, or to create and cast new ornament in plaster.

Models and molds are cast in a variety of mediums such as plaster, cement, fiberglass, resin, and gypsum. Colored and textured finishes such as Venetian, tinted or waxed plasters and scagliola polish off the project. Without the use of paint, the artist mimics a glossy marble. When onlookers observe a soft, faded, aged appearance, the goal of restorative ornamental plaster is met.

Dating back to the Pharaohs of Egypt over 4,000 years ago, plaster was used on surfaces in palaces and pyramids. These plaster surfaces, covered mostly in calcined gypsum still exist today. Greek architecture reveals that interior use of plaster and exterior use of stuccowork 500 years before the birth of Christ.

Conrad Schmitt Studios is privileged to continue this ancient tradition, in hopes that in years to come, ornamental plaster is still admired for its fire resistance, superior bonding ability, curing qualities, weather resistance, and most of all, traditional and historic beauty.

“I want to thank you and the artisans at Conrad Schmitt for the superb restoration of the 1914 Tiffany stained glass windows at Santa Gertrudis. Not only was the restoration executed flawlessly, but the project was completed on time and on budget, accomplishments rarely met in such detailed architectural work. The professionalism of your company and the skills of your craftsmen are unmatched in the restoration business…”

“We had almost 200 people come through... all socially distancing, of course! Rave reviews...some were in tears as they walked down the aisle, most in awe and a few said that they felt like they had just gone to heaven. ”

“I cannot begin to adequately express my appreciation. The restoration of the right side of the mural and recreation of the missing left half, working entirely from photographs, is artistically so well done that one cannot determine which is the recreation.”

“You have made fast friends of us at St. John the Baptist – we will be recommending you and singing your praises to one and all. This has been such a positive experience in every way imaginable. Love and prayers,”

“You have a wonderful business and are doing so much to protect church treasures…I was impressed with the work ethic of your employees but most of all the spirit generated throughout the entire operation.”

“Your interest, willingness to listen, readiness to suggest, and eagerness to excel enthralled our committee and bolstered the courage of its members to move ahead with the work at hand.”

“Just recently we completed the Red Mass…Those are participants who have seen St. Peter’s regularly over the years. Their astonishment and affirmation of the improvements undertaken by yourself and your associates, through the leadership of Father Sherlock and members of his parish, was universal.”

“I had thought we would just get our treasured window back as it had been, only more secure. I hadn’t reckoned on its looking so much better, with greater clarity and pieces I’d not noticed before. And it’s not just me—everyone comments on how beautiful it is…From the point of view of the person asking for donations, the widely respected reputation of Conrad Schmitt plus the close association between your church and Grace Church has made my job much easier…Please know that every time we look at that precious window all perfect and restored, we are glad.”

“We now have had the opportunity to celebrate Easter, Ordinary Time, Advent and Christmas…and continue to be overwhelmed with the fruits of your labors.”

“I just want to say a huge THANK YOU for all the beautiful… no: amazing windows in our chapel! Our three saints (Francis, Clare and Mother Maria Theresia) literally jump out to greet you when you enter the chapel, the images and colors are that vivid. Details are far more visible than I imagined they could be – the windows are simply stunning! The lunettes, too, are “high definition” with figures that convey all the tenderness and joy of the two events they commemorate.”

“Thank you for your personal efforts … to make this project one of the most talked about restorations in New York.”

“I think what most impressed us was the enormous care that you and your firm took at every step of the process. No detail was overlooked and no aspect of Sacred Heart Church’s history was too insignificant for your study and analysis…Thank you for your talent and skill.”

“The changed liturgical space is not only aesthetically pleasing, it functions better for our worship services. Thank you for assisting us in being faithful to the traditions embodied in our building while at the same time enhancing that space to accommodate the worship needs of the present and, hopefully, of the future.”

“The Cathedral has drawn some beautiful attention from the media and has become a new focal point of tours in the Shreveport area. What Conrad Schmitt did to restore and renovate this 78-year-old Gothic structured church into a beautiful Cathedral cannot be expressed in words.”