Green Bay, Wisconsin
St. Patrick Oratory is under the leadership of the Institute of Christ the King Sovereign Priest – a Society of Apostolic Life of the Pontifical Right. The Institute “recognizes the importance of a deep harmony between faith, liturgy, life and the power of beauty in attracting the human senses to the things above…” Part of the Institute’s mission is creating beautiful worship spaces in which to celebrate the Traditional Latin Mass. In October of 2018, St. Patrick Oratory reached out to Conrad Schmitt Studios to assist in transforming their whitewashed interior into an environment more aligned with their mission.

As with many projects, CSS artists began by assembling a color palette based upon items in the church that were to remain throughout the renovation, such as marble and flooring. For St. Patrick’s, that was their terrazzo flooring. The grey-green tone found in the terrazzo became an apt accent color, as it is associated with Ireland and the ministry of St. Patrick. Other red accent colors complement the terrazzo, and the warm neutral tones harmonize with the wood in the space.

As the church desired to phase the project for funding purposes, work first began in the sanctuary. A temporary altar was moved in front of the new communion rail and a curtain was draped to encapsulate the sanctuary space and minimize the disruption to the nave. First, a plaster skim coat was applied to the heavily textured walls to provide a smooth surface for the new stencils. Numerous stencils, ranging from one to four colors were used extensively throughout the space, some containing hand-painted highlights and shadows. The stencils depict symbols significant to the church, including fleur-de-lis and acanthus leaves. The altar, side shrines and communion rail were painted to appear that they had been carved from marble. Hand-painted medallions featuring archangels adorn the sanctuary walls.

Approximately six months later after the completion of the sanctuary, decoration began in the nave. Again, the walls were skim-coated with plaster and the decoration was laid out. A stenciled frieze above the windows features a gilded monogram of Christ. (Photo) Other stencils feature the Cross Pattee and oak branches. Highlights of gold leaf provide a subtle accent to the nave walls.

One of the outstanding features in the nave is the decorative paneled ceiling, featuring 108 stenciled panels

The final phase will include embellishment of the narthex spaces, which will incorporate decorative elements of the church into the welcoming areas. 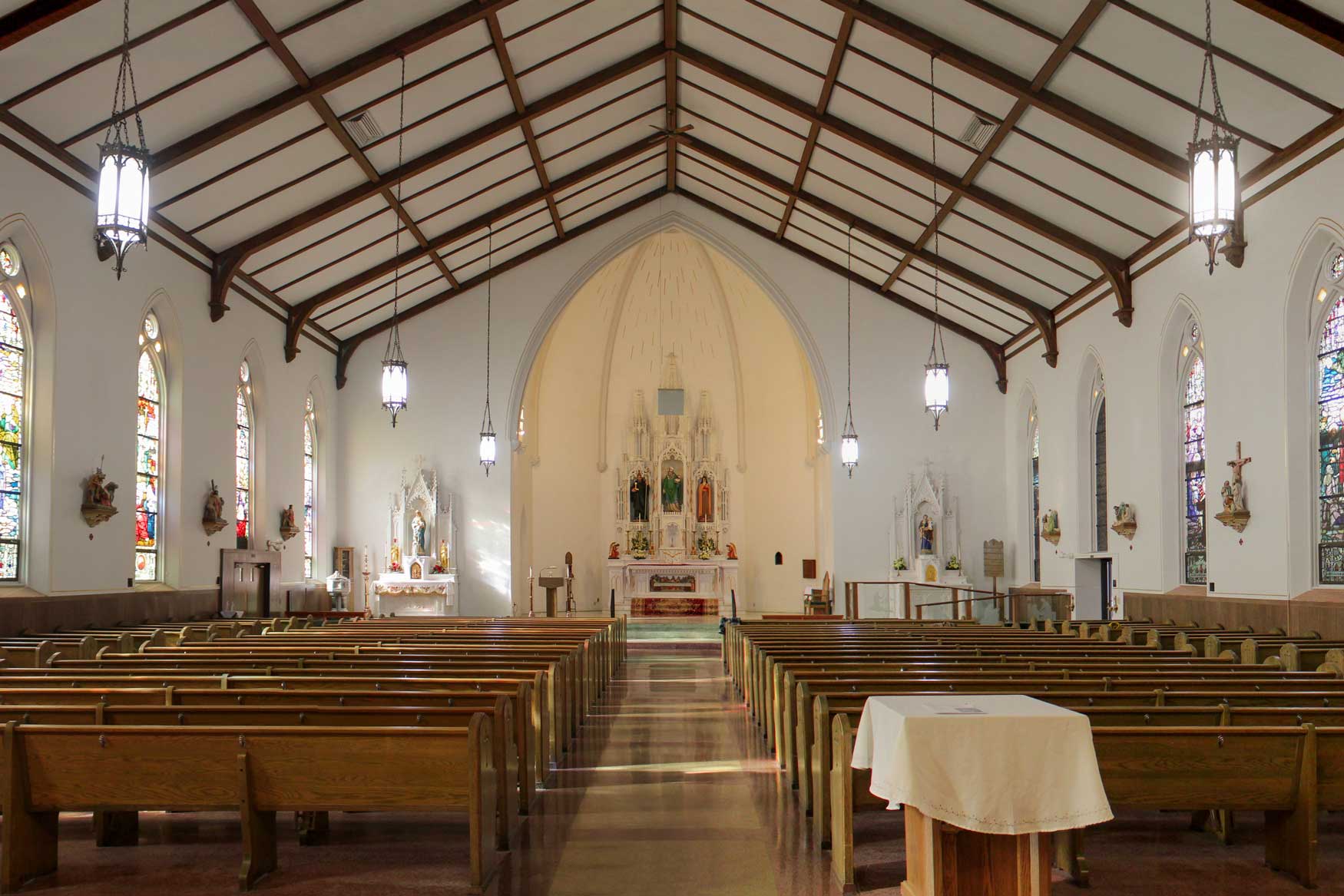 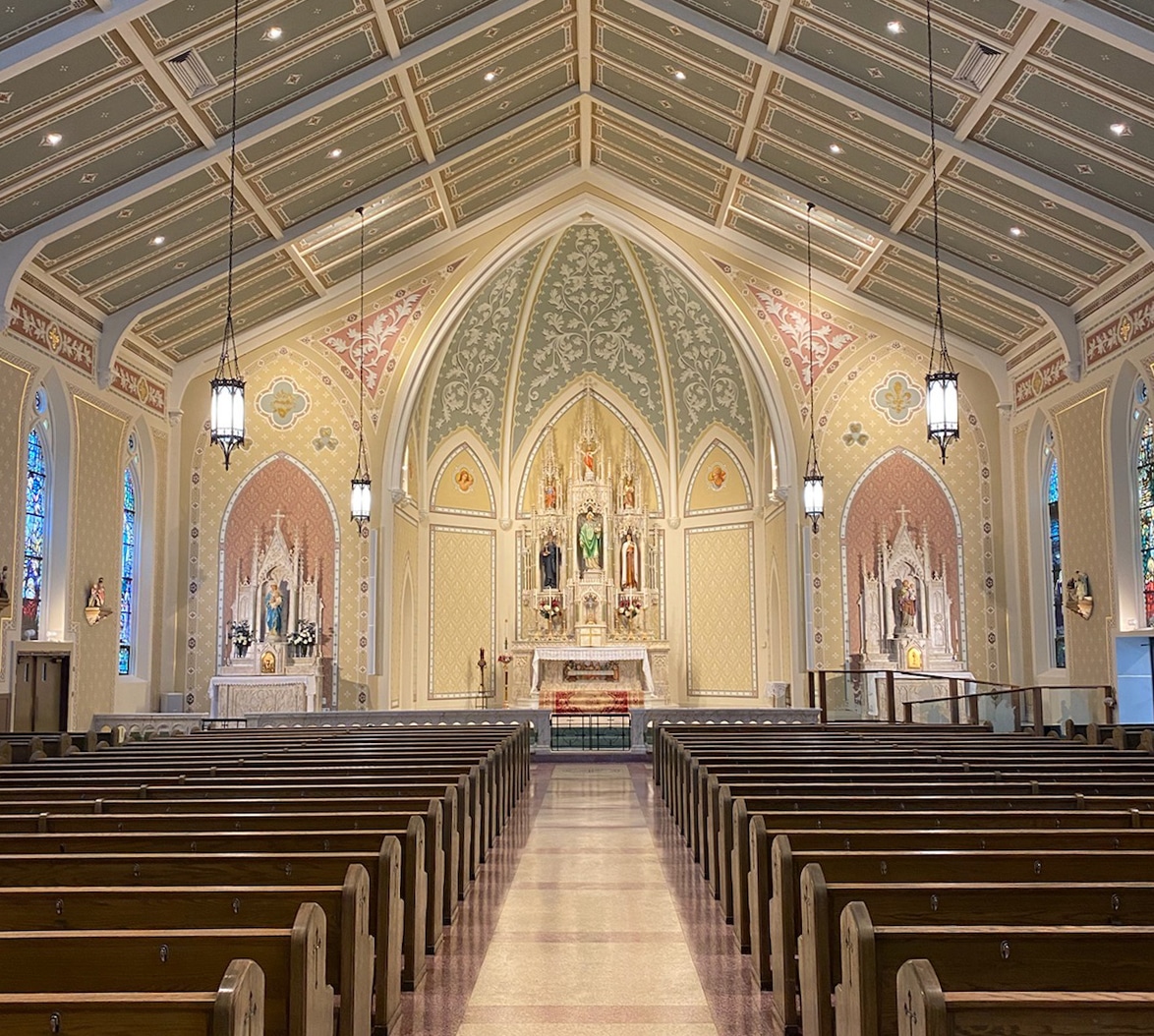 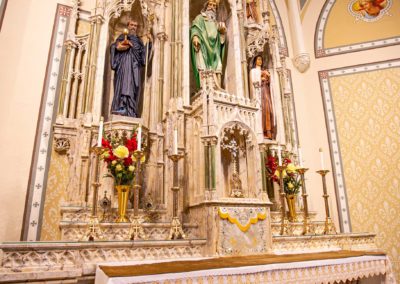 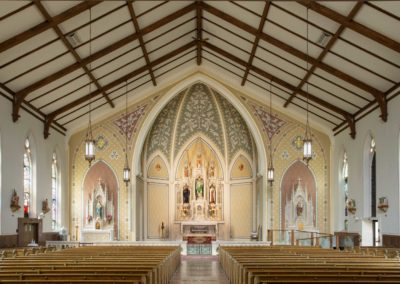 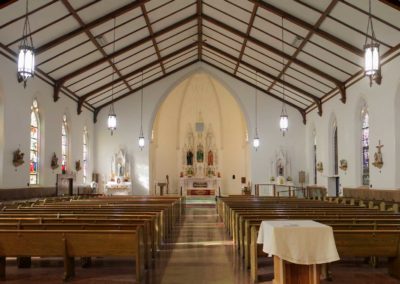 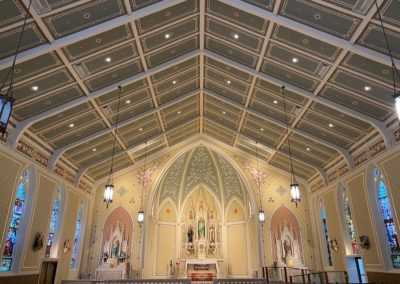 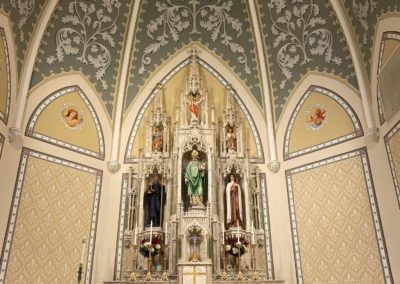 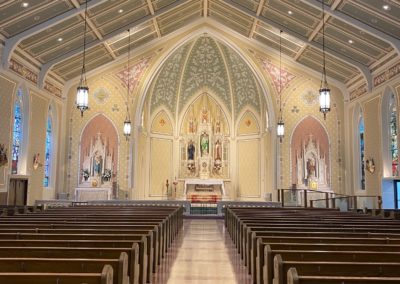