Each of the four windows represent a season of the year, with flora and fauna corresponding with each season. Within the side lancets are medallions symbolizing an aspect of the figure depicted. The predominant color in the background and border is blue, the color of Our Lady.

Spring is represented by the blooming cherry blossoms and behind St. Joseph is a bed of tulips. Above his head are two mourning doves, along with two robins in the outside lancets. The Easter lily he holds in his hand symbolizes his love for the Virgin Mary. The symbols in the flanking lancets are a crossed saw and block of wood for his carpentry; the dome of Saint Peter’s; a scene with his Holy Family; and a triangle and dividers, further representing his vocation.

Our Lady of Sorrows – Summer:

Summer is represented by roses, butterflies, finches, bluebirds, and chipmunks. Some symbols include the child Jesus and Mary of the Seat of Wisdom, the Tower of David, the Morning Star and the Ark of the Covenant in the side lancet medallions. Our Lady has a tear running down her cheek and a halo of seven stars, one for each of The Seven Sorrows:

Winter symbols include holly leaves, berries and falling snowflakes. The Congregation of Holy Cross, the door of the Cathedral Basilica of Notre Dame de Quebec and the dome of St. Joseph’s Oratory are also featured. Brother Andre was a Brother of the Congregation of Holy Cross. He is credited with thousands of reported miraculos healings. Brother Andre was declared venerable in 1978, was beatified by Pope John Paul II in 1982. In 2010, Pope Benedict XVI approved the decree of sainthood for Blessed Andre. 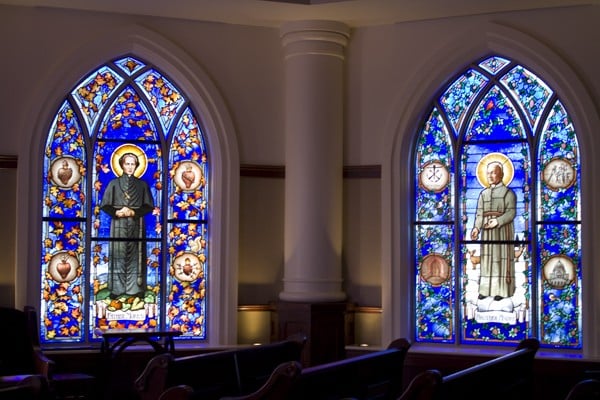 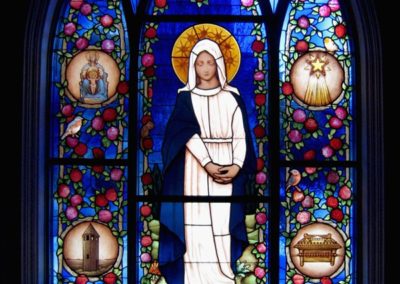 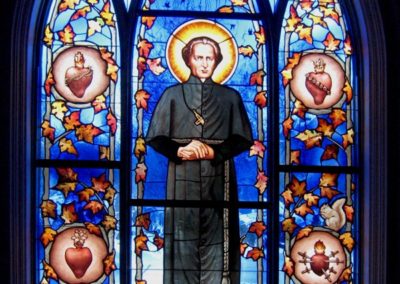 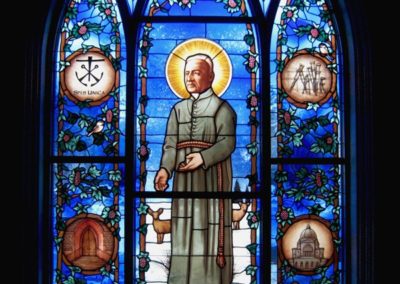 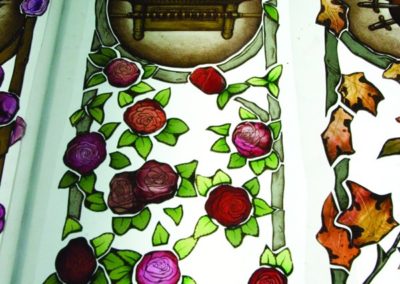